What is Calcium Acetate (E263) in Food? Uses, Safe, Side Effects

What is Calcium Acetate (E263) in Food? Uses, Safe, Side Effects 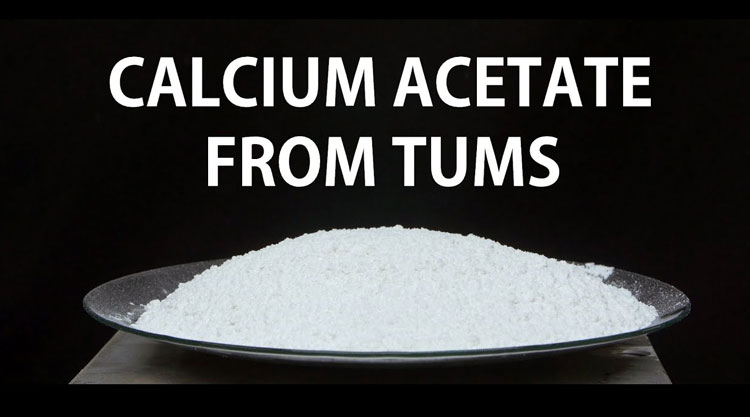 Calcium Acetate is a white crystalline powder or colorless crystals. It has a slightly alkaline taste and is difficult to dissolve. Calcium Acetate is easily oxidized in the air, so it should be kept in a tight container.

What is calcium acetate?

Calcium acetate is a salt that contains two ions: calcium and acetate.

Calcium acetate can be found in many foods, including cheese, yogurt and other dairy products. It’s also used as a preservative in some food products.

Calcium acetate is used as a source of calcium supplements that are taken by mouth.

The Food and Drug Administration has approved the use of calcium acetate for preventing osteoporosis (weak bones) and for treating hypocalcemia (low blood levels of calcium) caused by malabsorption syndrome (difficulty absorbing nutrients).

Oral liquid vitamin D supplements containing calcium acetate may be used to increase bone mineral density in patients who have osteoporosis or are at risk of developing it. They may also be used to treat or prevent rickets in infants and children who cannot take vitamin D administered by injection or gel capsules.

What is calcium acetate in food?

Calcium acetate is used as a food additive in cheese, crackers and bread. It’s also used in antacids.

Calcium acetate is a soluble salt that’s produced from calcium chloride and acetic acid. It’s an ingredient in some baking powders, including self-rising flour, because it helps produce carbon dioxide during the baking process. It’s also used in some soy-based meat substitutes to give them the same texture as real meat.

Calcium acetate can stay stable at high temperatures, making it suitable for use in products like cheeses where it helps control moisture content and prevent spoilage by inhibiting bacterial growth. Calcium acetate can also be used to inhibit mold growth on fruits and vegetables during storage or transport.

How is Calcium Acetate made?

The process of converting calcium carbonate into calcium acetate is known as neutralization. The process takes place in a reactor, which is similar to a chemical plant setup. The reactor uses a neutralizing agent that turns the acid into an alkaline solution. The neutralization process also brings about the formation of CO2 gas and water from the reaction.

The following steps outline how calcium acetate is made:

Calcium carbonate is added to water through hydrolysis reactions. Hydrolysis reactions are carried out at high temperatures and pressures in order to break down the compounds into smaller ones. During this process, sodium hydroxide or potassium hydroxide is used as the catalyst for breaking down calcium carbonate into calcium chloride and CO2 gas. The resulting solution contains sodium chloride (salt) and potassium chloride, which are further separated from each other by heating them at high temperatures again until they evaporate completely.

The remaining solution contains only sodium chloride and water left over from the hydrolysis reaction. It has now become an alkaline solution with a pH value greater than 7 (neutral). This solution is then mixed with acetylacetone under controlled conditions to produce calcium acetate crystals.

Calcium acetate is a white crystalline powder or granule. The anhydrous form is hygroscopic and will absorb moisture.

Calcium acetate is a strong conjugate base of acetic acid. As it dissolves in water, it dissociates CH3COO- ions and Ca+ and forms acetic acid (CH3COOH) and CaOH from these two ions. CH3COO- combines with H+, and Ca+ reacts with OH-.

What are the Uses of Calcium Acetate?

It can be used in the same way as sodium acetate as a buffering agent and a preservative to extend the shelf life of food. In addition, it can be used to fortify foods with calcium nutrition.
This additive is commonly found in calcium supplements and bakery products.

Calcium acetate inhibits the growth of many bacteria and molds. In bakery products (e.g. bread), it is commonly used to extend shelf life by preventing the formation of rope and mold growth. It is recommended to use 0.2 to 0.5% of the flour weight.

Calcium acetate is an essential calcium (Ca2+) supplement with the advantage of high water solubility and high absorption, as well as not causing gastric acid to be released.

Hyperphosphatemia is a condition where there is too much phosphate in the blood. Phosphate is an electrolyte that helps regulate body fluids.

Hyperphosphatemia can be caused by kidney disease or excessive intake of calcium, vitamin D or vitamin C.

The doctor will examine you and ask about your medical history, including any other conditions you have. He may also ask about your diet and medications.

Your doctor will first try to treat the underlying cause of hyperphosphatemia. If possible, he will decrease your intake of vitamin D and calcium supplements, as well as avoiding foods that are high in phosphate such as meat and fish.

The purpose of Calcium acetate

Calcium acetate is a salt of calcium and acetic acid. It is used in pharmaceuticals as an antacid and diuretic, and in household products as a preservative.

Calcium acetate is used in the treatment of hypocalcemia (low blood calcium levels) due to hypoparathyroidism, or low parathyroid hormone (PTH) levels. It is also used to treat osteoporosis associated with chronic kidney disease.

Calcium acetate can also be used for other applications.

Calcium acetate is usually taken one to two hours before meals or at bedtime with a full glass of water; however, it can be taken any time during the day with food or milk if needed. Take calcium acetate exactly as directed on the label, or as your health care provider has prescribed. Do not take more or less of it or take it more often than prescribed by your doctor.

If you forget a dose of calcium acetate, skip the missed dose and continue with your regular dosing schedule. Do not take two doses at once unless your doctor tells you to do so.

Calcium acetate and calcium carbonate are both safe and effective sources of calcium. However, they have different uses and drawbacks.

Calcium acetate comes from acetic acid (also known as vinegar). It can be made from different food products like wheat bran or corn syrup.

Calcium carbonate and calcium acetate are both good sources of dietary calcium because they provide 50% or more of the recommended daily value per serving (1,000 mg). However, when taken with food (instead of on an empty stomach), calcium carbonate has a higher absorption rate than calcium acetate (depending on the amount consumed).

These calcium-based phosphate binders have the same health problems if used long-term, which can cause soft tissue calcification and vascular calcification from calcium deposits.

In feed and premixes, calcium acetate can be used as both a preservative and a source of calcium.

It is imperative to note that ice and snow on roads pose a safety risk to winter traffic. This is because they not only reduce traffic capacity but also lead to accidents.
The most commonly used ice and snow melting agents are chloride salts, such as sodium chloride and calcium chloride.
On the other hand, long-term use of chlorine-containing ingredients in roads for deicing and snowing will cause environmental problems, including water pollution, corrosion of chloride ions on roads and bridges, and effect on plant growth.
Calcium magnesium acetate (CMA) is an environmentally friendly ice and snow removal product that is low corrosive and low harmful to plants. However, it is more expensive than sodium chloride and calcium chloride.

Is calcium acetate safe to consume?

Calcium acetate can be safely consumed in small quantities. It is a white, crystalline powder that is used as a dietary supplement and food additive. Calcium acetate is commonly added to foods such as breads and dairy products to improve their calcium content.

Calcium acetate has been studied extensively. According to one study published in the European Journal of Clinical Nutrition, calcium acetate was found to be safe for use in children and adults with osteoporosis. In addition, it was found that calcium acetate supplementation had no effect on kidney function or blood pressure in this group of patients.

Calcium acetate may also be used as an antacid for treating heartburn or indigestion and it can be taken orally or rectally for this purpose. However, there are some side effects associated with using calcium acetate as an antacid such as nausea, vomiting and constipation so it should only be taken under medical supervision.

Calcium acetate supplements can also cause side effects such as itching, rashes and hives if taken at doses higher than recommended by your doctor or pharmacist.

Calcium acetate is generally recognized as safe (GRAS) and can be used in food as a firming agent, pH controller, sequestrant, stabilizer, thickener, and texturizer. Here is a list of foods that may contain it and with maximum usage:

In the European Union (EU), calcium acetate E263 is an authorised food additive. Most of its food categories fall under “not limited.” Some of its approved uses include:

How long does calcium acetate work?

Calcium acetate is a common mineral that can be found in antacids, antiperspirants and other products. It is also used as a nutritional supplement and as an antidote for overdoses of acetaminophen (Tylenol).

Calcium acetate works by binding to the acids produced by the stomach. It increases the pH level of your stomach, which reduces the amount of acid in your stomach and decreases acid reflux symptoms. Calcium acetate is also thought to reduce inflammation in the esophagus, which can relieve heartburn symptoms.

The amount of time it takes for calcium acetate to work depends on several factors including how much you take, what other medications or supplements you’re taking and whether or not you have any underlying health conditions that affect how well your body absorbs calcium from supplements. If you’re taking more than one supplement containing calcium at once, consult with your doctor before taking them together because they may interfere with each other’s absorption into your bloodstream.

Calcium is an important mineral that helps maintain bone density and prevent osteoporosis by strengthening bones. Calcium is also essential for muscle contractions and nerve signaling.

Calcium acetate is an inorganic compound with the chemical formula Ca(CHCO)2. It is a white, water-soluble solid. It has been investigated for use as a soil amendment to increase calcium levels in soils, as well as for remediation of contaminated soils and for treating hydrogen sulfide gas emissions from coal mines.

Calcium acetate can be produced by neutralizing acetic acid with calcium hydroxide or calcium oxide.

The resulting precipitate is then filtered, washed and dried to yield a white powdery solid.

Calcium acetate is a salt that contains calcium and acetate ions. It is used as a salt replacer in processed foods, as well as in the manufacture of plastics and other products.

Because it is insoluble in water, it is often added to foods to increase their acidity without changing their taste. The addition of calcium acetate allows manufacturers to reduce the amount of sodium present in the food (sodium causes an acidic taste).

Calcium acetate is used for several applications in the food industry. It is widely used as an acidity regulator or buffer in various drinks, such as non-alcoholic beverages and carbonated drinks. It is also used to prevent crystallisation in ice creams and fruit jellies. Apart from that, it has additional uses including an anti-caking agent and its use as a colouring agent.