What is Sodium Erythorbate (E316) in Food and Why it can Accelerate Curing in Meat Products?

What is Sodium Erythorbate (E316) in Food and Why it can Accelerate Curing in Meat Products?

If you have ever read the ingredients label of sausage, ham, hotdog, bacon and other cured meat products, you may have noticed an additive named sodium erythorbate or E316, which functions as an antioxidant, a preservative and a curing accelerator in food.

Let’s dip into the navigation to know more about this ingredient:

What is Sodium Erythorbate?

It is the sodium salt of erythorbic acid, a stereoisomer of sodium ascorbate. Likewise, it is used as an antioxidant, a preservative and a curing accelerator in meat and fish products. The European food additive number for it is E316. 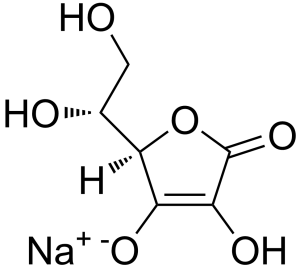 What is Sodium Erythorbate Used for in Food?

It is used as an antioxidant, a preservative and a curing accelerator, let’s see each function:

How does Sodium Erythorbate Work in Processed Meat?

The stable pink color, unique flavor, aroma as well as microbial control and antioxidant activity are developed by reactions of nitric oxide with meat. The whole process is associated with curing agents & added ingredients and the oxidation-reduction reactions among them.

1. Where does Nitric Oxide come from?

Potassium or sodium salts of nitrate and nitrite are used as a curing agent which is a must ingredient in curing meat as it can be reduced to nitric oxide (NO).

2. What Reacts with Nitric Oxide to Produce Color?

Myoglobin (a meat pigment) can combine with nitric oxide to form nitrosomyoglobin to produce a bright red color.

During heat processing and cooking, nitrosomyoglobin is converted to a stable pigment, nitrosohemochrome, which has a pink color.

3. What does Sodium Erythorbate do?

It is an antioxidant that can converts nitrite to nitric oxide, thereby speeding up this conversion and increasing the color of meat products.

How is it Made?

Sodium erythorbate is synthesized using the same procedure as for the production of erythorbic acid. Generally, it is also produced by fermentation of food grade starch hydrolysate but the  manufacturing process is finished in the 4th step of producing erythorbic acid.

What’re the Application of Sodium Erythorbate?

The cured meats in the human diet have a history of thousands of years.

Sodium erythorbate is used primarily to bring out a nice red color in sausage, ham, bacon and other cured meat products or fish products as it can accelerate the reduction of nitrite & nitrate to nitric oxide which generates the pink colour in meat.

It is always be added together with curing salt (nitrites/nitrates). Potassium or sodium salts of nitrate and nitrite act as a curing agent while sodium erythorbate accelerates the rate of curing by cutting down the processing time.

It functions as an antioxidant to keep the freshness and flavor by inhibiting the browning by scavenging oxygen and by reducing quinones back to polyphenol compounds.

It is used by spraying or dipping fruit and vegetables in an aqueous solution of sodium erythorbate.

It can prolong color stability and extend its shelf life.

Per the “European Commission database for information on cosmetic substances and ingredients”, it functions as an antioxidant in cosmetic and personal care products. ()

Is Sodium Erythorbate Safe to Eat?

Sodium erythorbate (E 316) is listed in Commission Regulation (EU) No 231/2012 as an authorised food additive in the EU as “Additives other than colours and sweeteners”. ()

After the studies of genotoxicity and carcinogenicity and others, EFSA claimed “there is no reason to revise the current ADI of 6 mg/kg bw/day and the use of erythorbic acid (E 315) and sodium erythorbate (E 316) as food additives at the permitted or reported use and use levels would not be of safety concern.” ()

The following are the approved uses and max usage, which are the same with that of erythorbic acid. ():

It is an approved ingredient in Australia and New Zealand with the code number 316. ()

It is common that sometimes consumers have questions whether sodium erythorbate is bad for our health and what are the side effects in the food we eat. However, it is generally considered safe and almost no reported health risks. Maybe some people are allergic or sensitive to it.

No, we can know it is synthetic from the manufacturing process mentioned above.

Yes, it is recognised as halal as it is permitted under the Islamic Law and fulfill the conditions of Halal. And we can find some manufacturers certificated with MUI halal.

Yes, it is kosher pareve. It has met all the “kashruth” requirements and can be certified as kosher or maybe kosher passover.

Yes, it is gluten free according to FDA that it does not contain wheat, rye, barley, or crossbreeds of these grains.

Generally, it is vegan as the manufacturing process without the use of animal matter or products derived from animal origin. So it is considered vegan and vegetarians can eat the food with it.

What does it Made Of?

From the chemical formula C6H7O6Na·H2O, we can know it is composed of water and sodium erythorbate anhydrous.

Does Heat Destroy it?

The decomposition temperature of erythorbic acid is 164–172°C, so it is stable during the heat process.

What are its Alternatives in Processed Meats?

Another antioxidant – Sodium Ascorbate, can replace it.

How Much is it Used in Bacon?

According to USDA, 0.055% of either sodium ascorbate or sodium erythorbate is required to add in pumped bacon. This addition greatly reduces the amount of free nitrite and, thus, minimizes the formation of nitrosamines. ()

Now you may have a knowledge of the antioxidant – Sodium erythorbate (E316), from the following aspects:

What kind of meat have you found it in? Let me know in the comment.