What is DATEM (E472e) in Bread? Made of, Uses, Safety, Side effects

What is DATEM (E472e) in Bread? Made of, Uses, Safety, Side effects

DATEM, the abbreviation of  “Mono- And Diacetyltartaric Acid Esters Of Mono- And Diglycerides Of Fatty Acids”, is the most commonly used emulsifier in bread as a dough conditioner with the European food additive number E472e. Generally, this ingredient is vegan, halal, free of gluten and dairy in food.

What is it in bread?

DATEM functions as a dough conditioner, which is used for strengthening the gluten network in dough during the baking process. It improves the texture and increases the volume in bread. It is labeled as “DATEM” or usual name “diacetyl tartaric acid esters of mono- and diglycerides” in its label.

What is it made of?

Stearic acid is the common fatty acids derived from vegetable sources, such as palm oil, sunflower oil or others.

The final product, DATEM may contain the following substances:

DATEM is easy to absorb water, especially in summer. So the manufacturers don’t make the particle size too small. Meanwhile, there are always carrier and anti-caking agent in DATEM, such as calcium carbonate, tricalcium phosphate and trisodium phosphate.

What is it made from?

DATEM is a synthetic emulsifier made from the esterification of acetic acid, tartaric acid, glycerol and fatty acids. It can also be produced from diacetyl tartaric anhydride with mono- and diglycerides of fatty acids that are derived from edible sources.

Off-white to light yellow waxes with a slightly acidic smell.

Soluble in most common fat solvents, methanol, acetone and ethyl acetate, insoluble in acetic acid and water. It can be dispersed in water and does not decompose for a long time. The 3% dispersion in water has a pH of 2 to 3. HLB value 8 to 10. 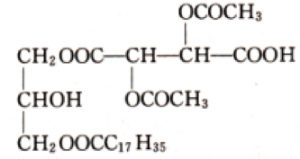 Stearic acid as the fatty acid

What are the Uses of DATEM?

It is mainly used as a dough conditioner for baked products, especially for yeast-leavened products, white bread and rusks. Also in bread improvers and in ready-mixed flours. Here’s a closer look at its various uses and functions.

Improve the texture and reduce hardness in fat-reduced biscuits without the loss of taste.

Improve the stabilization and whipping properties in toppings.

Its safety as a food additive has been approved by the FDA, EFSA and JECFA.

DATEM is generally recognized as safe (GRAS) as a direct human food ingredient and can be used in food with no limitation other than current good manufacturing practice. It is used as an emulsifier, an emulsifier salt and a flavoring agent and adjuvant.

FDA also stated that the emulsifying agent DATEM is generally recognized as safe when used in accordance with good manufacturing or feeding practice. ()

Categorized as an emulsifier, stabiliser, thickener and gelling agent. ()

It is an approved ingredient in Australia and New Zealand with the code number 472e. ()

What are the possible Side Effects of DATEM?

It is common that sometimes consumers have questions if DATEM is bad for our health and what are the side effects.

We understand that consumers prefer natural food and have concerns about the artificial emulsifier in the foods we eat. There are few health risks were reported, including allergic reaction, toxicity and so on.

A published study in 2002 said that DATEM may lead to adrenal overgrowth and heart muscle fibrosis on rats.  ()

Is it safe for pregnant?

Generally, it is safe but better consult with your doctor.

DATEM is not natural as it is made from chemical synthesis. Acetic acid, tartaric acid, glycerol and fatty acids are the main raw materials.

Yes, DATEM is halal, complies with the policy “Materials should not be derived from: pork or its derivatives, Khamr (alcoholic beverages) or khamr derivatives which are physically separated from Khamr, blood, carrion, and parts of a human body.” We can find some China manufacturers certificated with MUI halal.

Yes, it is kosher pareve. We can find some suppliers certificated with kosher in OU Kosher.

Yes, it is gluten free and can be used as an emulsifier in food without gluten. But as it is primarily used in baking to strengthen the gluten network in the dough, so it may make no sense in gluten-free doughs. Do you think so?

Yes, it is vegan, DATEM produced from chemical synthesis, the raw materials and manufacturing process without the use of animal matter or products derived from animals. It is considered vegan and suitable to add in the diet of vegetarians.

Yes, it is dairy free as it doesn’t derive from a dairy source. People who’re lactose intolerance or with milk allergy can eat the food with it.

Now you may have a good knowledge of the emulsifier – DATEM (E472e), from its production; composition; uses in bread; approved safety, possible side effects and some FAQs such as is it vegan, gluten free, synthetic or natural.