Polysorbate 40, also known as Tween 40, the full name polyoxyethylene (20) sorbitan monopalmitate, 40 means monopalmitate. It is an emulsifier and stabiliser in food with the European food additive number E434.

How is it Made?

This ingredient is made from the chemical reaction among sorbitol, palmitic acid and ethylene oxide. The manufacturing process is similar to other polysorbates: 20, 60, and 80.

Palmitic acid and stearic acid are the most common saturated fatty acid found in animal fats & oils and plant oils. Like other fatty acids, palmitic acid is also present in nature usually in the form of triglycerides.

The following are the natural sources high with palmitic acid ():

It is produced from d‐glucose which is commonly made from maize or tapioca. Learn more about Sorbitol 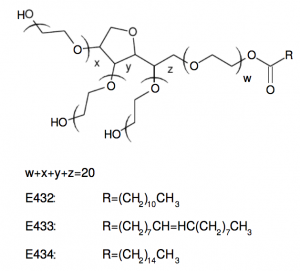 What’re the Uses of Polysorbate 40?

Different with other polysorbates, polysorbate 40 is approved as an indirect emulsifier instead of a direct food additive by the FDA (). That makes it used less in food in the USA.

Polysorbate 40 is also used as an emulsifier or surfactant to help mix oil and water in cosmetics and personal care products.

What’re the Possible Side Effects?

It is safe when used as a food additive. However, consumers’ health concerns are generally on two carcinogens: ethylene oxide, 1,4-dioxane and also the blood brain barrier disruption, and some allergic symptoms.

This information is explained in that of polysorbate 80 side effects.

It is not natural as it is made from chemical synthesis, the referred reactions are esterification and condensation.

Is it Halal, Kosher and Vegan?

Yes, polysorbate 40 would be halal, kosher and vegan if the fatty acid palmitic acid is sourced from vegetables.

Now you may have a knowledge of the emulsifier – Tween 40/Polysorbate 40 (E434), from its production, uses, approved safety, possible side effects and some FAQs such as is it vegan, halal, kosher, synthetic or natural.

What kinds of food or cosmetics packaging have you found this ingredient in? Let me know in the comments.

Founder of FoodAdditives.net: major in pharmaceutical in university and have been selling food additives since 2012. I would like to help readers expand their knowledge of ingredients in their food.