What is Sodium Stearoyl Lactylate E481 in Food? Uses, Safe, Side Effects

What is Sodium Stearoyl Lactylate E481 in Food? Uses, Safe, Side Effects 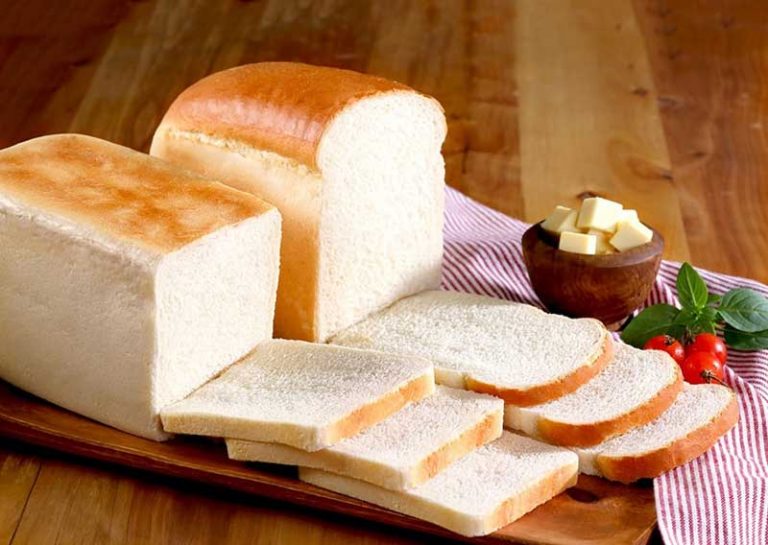 Sodium stearoyl lactylate, more commonly referred to as E481, is a type of food additive that is typically found in baked goods, puddings and frostings, bars, candies, ice cream and many other processed foods. The primary purpose of this compound is to decrease the amount of needed fat and eggs. Although it does help to bind moisture, this additive does contribute to a lot of controversy still today about health risks.

This article will discuss Sodium Stearoyl Lactylate (C-16H33NaO2S) in food, what it is, and why it is used. It will also shed light on its uses and safety. In addition, the article will explore some of the side effects related to this product, as well as its presence in other products outside of food.

What is Sodium Stearoyl Lactylate?

Sodium Stearoyl Lactylate (SSL) is a food additive made from the combination of sodium and stearic acid with lactic acid. The combination produces a white, free flowing powder that is used as an emulsifier in many foods. It’s also used to create creamy texture in baked goods.

The FDA has approved SSL as safe for consumption up to 0.5% by weight in foods.

Where is the Origin of Sodium Stearoyl Lactate?

Sodium stearoyl lactylate (SSL), also known as sodium lauroyl lactylate and lactic acid ester of stearic acid, is a food additive used as a dough conditioner. It improves the quality of baked goods by increasing volume and reducing stickiness. SSL is used in commercial preparations of baked goods such as breads, cakes, waffles and tortillas.

The origin of SSL is in its name: it is derived from vegetable oils and animal fats or tallow. The sodium salt of SSL can be prepared from anhydrous lactic acid esterified with stearic acid.

What is Sodium Stearoyl Lactylate Used for?

Sodium stearoyl lactylate (SSL) is an emulsifier and surfactant. It is a commonly used ingredient in food, cosmetics, and personal care products.

SSL is often used in baked goods (such as cakes, cookies and breads) to improve texture, extend shelf life, prevent staling and provide viscosity to the food product. It is often used in conjunction with other emulsifiers such as mono- and diglycerides, lecithin and polysorbates. It is also used in non-baked foods such as ice cream, dairy products like yogurt and cheeses, pickles, peanut butter, jam, mayonnaise and salad dressing.

SSL is used as an emulsifier in bread, cakes and other food products. Emulsifiers are substances that help stabilize the interface between two liquids that do not mix well together, such as oil and water. This prevents the separation of these two liquids.

There are other foods that may contain SSL:

Sodium stearoyl lactylate is a moisturizing agent that can be used for skin care. It is a powdery substance that has the ability to retain moisture in the skin. It also has an emulsifying effect, which means it can help keep oil and water from separating.

SSL is also used as an emulsifier for cosmetics such as shampoo, conditioner, body lotion and skin cream. In addition to its emulsifying properties, it also has antibacterial properties that help prevent acne breakouts on your face or back!

How is Sodium Stearoyl Lactylate Made?

Sodium stearoyl lactylate (SSL) is an organic compound which is the sodium salt of stearoyl lactylic acid. SSL is a modified form of stearic acid and it’s a surfactant that plays an important role in food manufacturing.

Sodium stearoyl lactylate (SSL) is manufactured by esterification of stearic acid with lactic acid. The reaction produces a mixture of monoesters, diesters and triesters. This mixture is called a “crude” SSL. The crude SSL then undergoes further processing to remove impurities and excess water through distillation or crystallization. The resulting product can be sold as such or further purified by recrystallization or distillation before being sold on the market as pure SSL powder or granules.

The EFSA reports neutralization first, followed by esterification afterwards. In brief, the manufacturing process is as follows:

As SSL is hygroscopic, it will become sticky when exposed to moist air. Sometimes SSL powder is blended with an anti-caking agent (e.g. calcium carbonate) to make it less sticky and free-flowing.

What is Sodium Stearoyl Lactylate Made of?

Because SSL is a mixture, impurities are either brought into it from raw materials or generated during the production process.

The three major components of it are as follows:

As a result, the SSL structure can be described as follows: 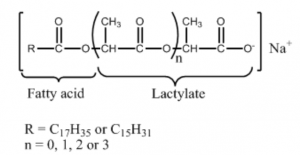 It is also possible for SSL to contain the following impurities:

10-12, This compound gives oil-in-water emulsions, O/W, and also functions as a humectant.

Insoluble in water, dispersible in hot water. As a hydrophilic emulsifier, SSL has poor water solubility at low temperatures, so heat treatment of water is required before use.

In terms of safety, it has been approved by the Food and Drug Administration (FDA), the European Food Safety Authority (EFSA), as well as the Joint FAO/WHO Expert Committee on Food Additives (JECFA).

According to the FDA, SSL is a direct multifunctional food additive and is approved for use as an emulsifier, stabilizer and surface-active agent in the following food categories:

Commission Regulation (EU) No 231/2012 lists sodium stearoyl lactylate (E481) as an authorised food additive and categorizes it under “Additives other than colours and sweeteners”.

As with calcium stearoyl lactylate (E482), it is permitted at maximum levels (MPLs) of 1000 to 10000 mg/kg in foods. Among the foods that may contain it are:

In the “Others” category

A code number 481 identifies it as an approved ingredient in Australia and New Zealand.

What are the Benefits of Sodium Stearoyl Lactate Emulsifier?

Sodium stearoyl lactate Emulsifier, also known as SLS or sodium stearoyl lactylate, is a food and cosmetic additive that is used as an emulsifier for fat-in-water emulsions. It is commonly found in baked goods, syrups, ice cream, margarine and canned meats.

Sodium Stearoyl Lactylate is an effective moisture barrier and oil seperator in many food products. It helps prevent oil separation from the water phase in an emulsion by combining with the oil droplets to form a larger particle size. This allows for better stabilization of the product during storage through reduced evaporation of the water phase due to its increased size and viscosity properties.

What are the Side Effects of Sodium Stearoyl Lactate?

Is Sodium Stearoyl Lactylate Bad for you?

Sodium stearoyl lactylate has been shown to be safe for consumption by humans in the amounts found in foods. It has also been approved for use in the European Union (EU) and in Canada.

It’s important to note that sodium stearoyl lactylate may not be suitable for people with certain allergies or sensitivities. Some people may experience allergic reactions when they consume this additive.

Glycerol monostearate (GMS) and Sodium Stearoyl Lactylate are both emulsifiers that are used in food products and pharmaceuticals. Both GMS and SLS have similar functions, but they have different chemical and physical properties.

Glycerol monostearate is a white powder with a neutral taste. It is made from the reaction between glycerin and stearic acid, which is found in animal fats. This compound has a long shelf life, so it can be used for an extended period of time without losing its effectiveness. It also has good water solubility, which means it dissolves easily in water-based solutions such as fruit juices or cream-based sauces.

Sodium stearoyl lactylate is a white powder with a slightly salty taste. It is made from the reaction between lactic acid and stearic acid, which is found in animal fats. This compound can also be used for an extended period of time without losing its effectiveness because it has good water solubility like GMS does.

Where to Buy Sodium Stearoyl Lactylate?

Sodium stearoyl lactylate (SSL) is a food additive used as an emulsifier and stabilizer in baked goods, dairy products, meat products and some beverages. It is also used as a pharmaceutical excipient in tablets.

Sodium stearoyl lactylate can be purchased from a number of chemical suppliers. Most companies will sell small quantities at relatively low prices. There are also numerous online stores that sell SSL in bulk quantities, although they may charge higher prices than chemical suppliers.

No, sodium stearoyl lactylate is a milk derivative that is used as an emulsifier in many food products. It is often used in baked goods, dairy products, and other foods. It can be found in everything from bread to ice cream to salad dressing.

The term “dairy” can be confusing because it does not always mean that the product contains milk or milk products. This can lead some people to believe that sodium stearoyl lactylate has dairy origins when it may actually be plant-derived.

Sodium stearoyl lactylate is made from combining lactic acid (a byproduct of cheese production) with stearic acid (a fatty acid found in animal fats). It’s commonly used as a replacement for animal-based ingredients such as eggs, butter or milk in baking. This makes it a vegan-friendly ingredient.

No, sodium stearoyl lactylate is a chemical compound that is created by the reaction of lactic acid and stearic acid. It is a common ingredient in baked goods, and it also helps to increase the shelf life of products like frozen meals.

Sodium stearoyl lactylate is often confused with natural ingredients, such as milk or eggs, but it is actually a synthetic substance created in laboratories.

Yes, sodium stearoyl lactylate is a common food additive used as a dough conditioner. It is found in bread, cakes, and other baked goods.

The primary concern regarding the ingredient is the lactic acid produced by fermentation of whey and other dairy products. While this lactic acid can be halal, it’s not always clear whether or not it is. The best way to avoid this concern is to buy products that clearly state “Halal” on the label.

It is almost impossible to avoid the additive E481. It is present in so many products, and is often categorized as a controversial ingredient because it is “generally regarded as safe.” That doesn’t mean that it’s not potentially harmful though, or even dangerous. It is up to us to decide whether or not we want to consume this additive, and it’s for us to decide whether or not E481 actually makes our food taste and look better.