What is Ammonium alum E523? Uses, Safe, Benefit, Side Effects

What is Ammonium alum E523? Uses, Safe, Benefit, Side Effects Ammonium alum or ammonium aluminum sulfate is a chemical compound that might surprise you because of its many uses, severe side effects, and long history of human use. But first, it is important to understand the different types of alum and how they are used as well as their chemical properties. E523 is an ammonium alum European number assigned to it when used in food.

Ammonium alum is the chemical compound of Alum and Ammonium salt (NH4). It is pale pink or white in color. This chemical compound has many uses in various industries such as textiles, paints, and cosmetics. Students should focus on benefits, uses, and side effects when trying to learn more about ammonium alum.

What is ammonium alum?

Ammonium alum is an inorganic compound that is commonly used as a mordant in dyeing. It is also known as ammonia alum, ammonium aluminum sulfate, and NH4Al(SO4)2·12H2O.

Ammonium alum is the main ingredient in some dry shampoos and hair color products. It can be found in some skin care products as well, including aftershave lotions, deodorants, soaps, and sunscreens.

Ammonium alum has been used for centuries because it helps to remove dirt and oil from the skin. The chemical also helps to heal minor burns, but it should not be applied to severe burns or any type of open wound because it can cause blistering and irritation of the skin.

What is ammonium alum used for?

Ammonium alum is an inorganic compound, the double sulfate of ammonium and aluminium. It is the main ingredient in several brands of alum used for household cleaning, water purification and medicine. Ammonium alum is also used in many industrial processes, including:

To remove hydrogen sulphide from oil and gas wells in the extraction of petroleum products;

How is ammonium alum made?

Unlike potassium alum, which is found naturally and synthetically, aluminum alum is produced commercially by combining ammonium sulfate and aluminum sulfate solutions. 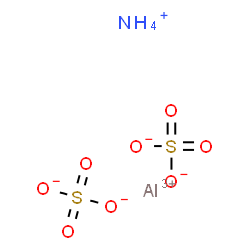 What’s the application of ammonium alum?

Ammonium alum, also known as potash alum, is an inorganic compound that is used to make water soft. Ammonium alum is a double salt of ammonium sulphate and aluminium sulfate. It comes in the form of white crystals or powder and is soluble in water.

Ammonium alum can be used for a wide range of purposes such as:

Food preservation: Ammonium alum has been used since ancient times as a preservative which increases the shelf life of food products. It can be used on a variety of foods including fruits, vegetables, meats, and seafood. Ammonium alum also helps prevent spoilage by inhibiting the growth of bacteria on food surfaces which improves their safety for consumption.

Water softening: The most popular use of ammonium alum is to soften hard water by removing the calcium and magnesium ions from it. This improves the quality of the water and makes it more suitable for various household tasks such as washing clothes. The reduction in calcium levels also helps prevent scale formation in pipes which would otherwise lead to clogging and leaks.

Food additive: Ammonium alum is used as an additive in food products such as cheese, chocolate, baked goods, canned beverages, etc. It provides these products with better texture and prevents them from becoming stale quickly.

Soil stabilization: Ammonium alum can be added to soil to stabilize its pH level which makes it more suitable for growing crops like vegetables. It also helps prevent soil erosion by increasing its cation exchange capacity. This makes ammonium alum a good choice for growing plants that require alkaline soil.

Ammonium alum, also known as potassium alum, is a chemical compound that is soluble in water and is used as a food additive and cosmetic ingredient. Ammonium alum is often used to clarify beverages and can be found in beer and wine. It is also used in a wide range of products, including cosmetics and toothpaste.

What’s the difference between ammonium alum and potassium alum?

Ammonium alum is most commonly used as an aftershave, while potassium alum is a common ingredient in deodorant and antiperspirant products. Ammonium alum can also be used as an astringent to treat minor cuts, scrapes and burns. Both forms of alum have been used for thousands of years to purify water by removing organic impurities like oils and grease from the surface of the water.

It has been suggested that ammonium alum contributes to Alzheimer’s disease and other neurodegenerative diseases in humans.

While it has been approved as a food additive by the FDA, the European Food Safety Authority, and the Joint FAO/WHO Expert Committee on Food Additives (JECFA), its use is restricted or banned in many countries, including Europe, Japan, and China due to restrictions on aluminum in foods.

When used according to good manufacturing practices, it is generally recognized as safe (GRAS).

It is listed as an authorized food additive in Regulation (EU) No 231/2012 under the category “Additives other than colors and sweeteners”.

What are the possible side effects of ammonium alum?

Ammonium alum is a chemical that has been used for hundreds of years. It’s a common ingredient in many soaps, shampoos, and other products, but it can cause side effects if you are allergic to it. The following side effects have been reported for ammonium alum.

Allergic reactions: This can include skin irritation, rash, itching, and hives (urticaria). Contact dermatitis is a rarer reaction.

Eyes: Eye irritation may occur due to contact with the powder or solutions. If this occurs, rinse well with water.

Allergic reactions: If you are allergic to ammonium alum, you may experience an itchy rash or hives. You could also have trouble breathing if the reaction becomes severe enough.

Contact dermatitis: This is another type of skin reaction that results from contact with ammonium alum. It causes redness and swelling of the area where the chemical touches your skin.

Burns from concentrated solutions of ammonium alum can result in severe blistering and scarring over time when left untreated by a doctor.

What is the health benefits of ammonium alum?

Ammonium alum is a compound that’s made up of aluminum potassium sulfate, or AlK(SO4)2. It’s also known as potassium alum, permanent alum, or ammonium hydroxide. This compound has many uses in the cosmetic industry, but it’s best known for its ability to tighten pores and provide anti-inflammatory benefits. Here are some other health benefits of ammonium alum:

It can help improve skin hydration. Ammonium alum can act as an astringent on the skin, which means it may help tighten pores and increase hydration levels by tightening the skin and reducing excess oil production on your face.

It can be used as a laxative for constipation relief. Ammonium alum is often used in laxative formulas because it helps stimulate bowel movements by increasing water absorption and speeding up intestinal transit time. This can help relieve constipation symptoms like hard stools and abdominal cramps.

Is ammonium alum safe for pregnant?

In general, ammonium alums are considered safe for use during pregnancy. However, there are some exceptions:

If a woman has an allergy to any of the ingredients in a particular product that contains ammonium alum, she should avoid using it during pregnancy.

If a woman is sensitive to aluminum salts, she should avoid using ammonium alum during pregnancy.

If you’re not sure whether or not you have an allergy or sensitivity to ammonium alums or aluminum salts, talk with your doctor before using them during pregnancy.

Where to buy ammonium alum?

If you can’t find it in your local grocery store, try an online retailer like Amazon or eBay

It’s also possible to make your own ammonium alum by combining aluminum sulfate with ammonium chloride. However, this requires a laboratory and specialized equipment, so it’s not something most people will be able to do at home

Is ammonium alum safe for skin?

Yes, ammonium alum is safe for skin. The ammonium alum used in cosmetics is a compound containing aluminum, potassium, and ammonium. It’s found in many products that you use every day, like deodorant, toothpaste, and facial cleansers.

Where does ammonium sulfate come from?

Ammonium sulfate is a byproduct of the production of hydrogen chloride. Ammonia, which is found in air, reacts with sulfuric acid to produce ammonium sulfate.

Ammonium alum is not toxic, and it does not cause any adverse health effects. This compound does not have any negative side effects when consumed in small quantities, but it can cause minor gastrointestinal discomfort if consumed in large quantities.

Is ammonium alum the same as aluminium?

Ammonium alum is not the same as aluminium. Ammonium alum is the chemical compound NH4Al(SO4)2·12H2O, which contains aluminum, sulfate, and hydroxide ions. It’s also known as crystalline alum.

Aluminium is an element with symbol Al, atomic number 13, and atomic mass 26.981538 g/mol. It is a silvery-white metal that conducts heat and electricity well and has high reflectivity.

Ammonium alum is a chemical compound that is primarily used as a skin-whitening agent in tablets and creams intended to help treat hyperpigmentation in patients who have skin discoloration from conditions such as acne, a variety of burns, or simply hormonal problems such as melasma. It can also be used in some foods and toothpaste as a whitening agent, to keep the foods looking fresh or to help tooth enamel remain strong.

It’s typically used in low concentrations and hasn’t been shown to have any serious side effects or negative interactions with other medications. In some cases, it may even improve the appearance of your teeth and slow down the rate at which plaque accumulates on them so you have less need for dental hygiene procedures like fillings or root canal treatments.