What is Trisodium Phosphate E339(iii)? Uses, Types, Safe, Side Effects

What is Trisodium Phosphate E339(iii)? Uses, Types, Safe, Side Effects What is trisodium phosphate?

Trisodium phosphate, also known as TSP, is a typical cleaning and household chemical used primarily in the sanitation industry. It’s often used to remove grease and grime from surfaces that aren’t easily cleaned by water alone.

Trisodium phosphate is a salt of phosphoric acid, an inorganic compound containing phosphorus. It can be found naturally in some foods, including meat, fish, and dairy products.

The U.S. Environmental Protection Agency (EPA) has classified it as a water pollutant when discharged into high concentrations of water sources. Trisodium phosphate neutralizes acids and bases, which makes it useful in many industrial processes. In addition to its industrial uses, trisodium phosphate is found in many cleaning products sold in stores today.

What is trisodium phosphate in food?

Trisodium phosphate (TSP) is a food additive used as a leavening agent and emulsifier. It is also used to clean kitchen surfaces, such as floors and walls, and to remove grease from pots and pans.

Trisodium phosphate is used as a flavour enhancer and food additive to increase shelf life in food and beverages. It is used to inhibit the growth of mould and yeast, increase the protein content of processed cheese, improve the consistency of baked goods, stabilize emulsions, and prevent discolouration in foods such as canned vegetables and fruit juices. Trisodium phosphate can also be used as an anticoagulant for blood samples. In personal care products such as toothpaste and mouthwashes, trisodium phosphate prevents bacterial growth from forming on product surfaces (e.g., toothbrush bristles).

What are the types of trisodium phosphate?

Trisodium phosphate is an inorganic compound with the chemical formula Na3PO4. It is one of the earliest known metal-ion detergents and is widely used in industrial applications such as construction, water treatment, and food processing. In these applications, it is often referred to as soda ash, which refers to sodium carbonate (Na2CO3), which is another form of trisodium phosphate.

There are two main types of this inorganic compound:

Trisodium phosphate dodecahydrate is a white powder dissolves quickly in water to form an alkaline solution. It is mainly used as food additive or preservative and as an industrial cleaning agent.

Trisodium phosphate dodecahydrate is also used as an emulsifier, water softener, mineral supplement, and fertilizer in agriculture and horticulture applications, such as turf care products.

Phosphate is a primary component of all living cells and can be found in many foods such as dairy products, meats, grains, and certain vegetables. However, it does not occur naturally in some foods such as fruits and vegetables due to soil deficiencies or other factors affecting their growth.

How is trisodium phosphate made?

With its high solubility in water and alkaline solid solution, trisodium phosphate is a strong base and weak acid salt. 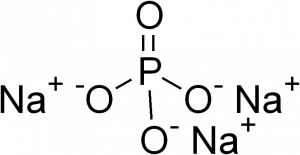 Why is trisodium phosphate in cereal?

The most common application is in cereals, like cinnamon toast crunch, which contains TSP, lucky charms from General Mills, and other ingredients.

In response to a client’s concern about the safety of trisodium phosphate in cereal products, General Mills responded that they add it to adjust acidity when clients misidentify it with a technical grade used as a paint thinner and cleaner.

What is trisodium phosphate used for?

Trisodium phosphate is an inorganic compound used as a cleaning agent, a stain remover, and a food additive. In addition to its many uses, trisodium phosphate has also been used for its ability to remove stains from clothing.

Trisodium phosphate is an alkaline cleaning agent often found in cleaning products such as the oven or toilet bowl cleaners. It can be used on many surfaces, including glass, porcelain, and tile. Trisodium phosphate is also used as an ingredient in some toothpaste and mouthwashes because of its ability to soften and loosen plaque on teeth.

Besides being a sequestrant, it can also chelate metal ions in food. Unlike the technical grade, which mainly serves as a cleaner and detergent, the food grade is purified and less concentrated. Therefore, it is safer.

It reduces acidity in cereal products. As well as emulsifying pasteurized cheese, it is an acidity regulator in preserves, fruit jellies, and jams.

A cosmetics and personal care product contains TSP functions as a buffer and chelator, according to the “European Commission database for cosmetic substances and ingredients”.

After brushing teeth, homemade toothpaste/mouthwash could be prepared by mixing trisodium phosphate and baking soda. The alkaline of TSP can be adjusted mildly by adding baking soda.

There are many industrial uses for technical grade trisodium phosphate, such as textiles, printing, dyeing, papermaking, and power generation.

Grease and oils are typically cleaned with alkaline. It removes metal ions from water that is soluble in water, such as magnesium,

calcium, aluminium, and iron precipitate them into insoluble phosphate precipitates.

Because trisodium phosphate has a certain penetration and emulsification ability, it can be used to seal and clean metal surfaces. Because of this, it can be very effective in removing dirt and grease from metal surfaces because it can enhance the wetting ability of water. Adding TSP to liquid household bleach is expected to clean the house.

Is trisodium phosphate safe to eat for the body?

Trisodium phosphate is not very safe for the body because it can cause kidney damage and other health problems if taken in large doses. In addition, there are many other safer alternatives for you to use on your skin and hair.

Trisodium phosphate is not safe to eat because it can cause stomach cramps, diarrhoea, vomiting and nausea if ingested in large amounts. The effects of trisodium phosphate on the body depend on how much you ingest at one time. For example, if you have kidney problems or have been taking diuretics, you may be more susceptible to adverse effects from trisodium phosphate.

Under good manufacturing practice, they can be combined with mono-disodium phosphate, generally recognized as safes (GRAS).

A group acceptable daily Intake (ADI) of 40 mg/kg body weight (B.W.) per day for phosphates expressed as phosphorus has been determined by EFSA for 2019. Phosphates with appropriate use levels are not genotoxic, carcinogenic, or developmental toxic.

Most food categories allow the use of phosphates, which may be found in the following foods::

Code 339 has been assigned to this ingredient in Australia and New Zealand.

What are the possible side effects of Trisodium phosphate?

Trisodium phosphate is a chemical compound commonly found in cleaning supplies such as dishwashing detergent. It is corrosive to the skin, eyes and throat and may cause organ damage if ingested in large quantities. When this compound comes into contact with your body, it can cause burning or discomfort to the affected area.

The most common side effects of trisodium phosphate include:

Tripotassium phosphate (TKP) and trisodium phosphate (TSP) are both used as cleansing agents in the industry, but they have different applications in the home. TSP is a more powerful cleaner that should be used sparingly.

Tripotassium phosphate is a chemical compound with the formula K3PO4. It is a white solid inorganic salt with an alkaline pH of 11-12. TKP can be used in many household products such as dishwashers and laundry detergents. It has many uses in industrial applications such as boiler cleaning and water treatment.

Two differences are briefly described below:

Uses: Food additives with the same application are listed on the European food additives list. Intake of sodium can be reduced by using tripotassium phosphate.

Regulation: food additives such as dipotassium phosphate (only the mono and di forms) are not listed in the FDA’s list.

Trisodium phosphate can cause skin burns when it comes into contact with unprotected skin for long periods. It should always be handled with care when using it around children because of its potential for harm.

Where to buy trisodium phosphate?

You can purchase trisodium phosphate from several different sources, including:

Chemical supply companies. Many companies sell trisodium phosphate and other chemicals for use in industrial settings. It can be used in manufacturing many different products and is often used to clean machines and surfaces exposed to certain chemicals.

Online retailers. Some online retailers sell trisodium phosphate in bulk quantities for use in commercial applications. These types of orders are usually shipped by truck or railcar, not by air freight or parcel service because they are typically large enough that they cannot fit into an aeroplane (or truck).

Online: Shop online for trisodium phosphate at Amazon or eBay. You can also try Walmart, Target, and other big box retailers like Walgreens or CVS Pharmacy.

Is trisodium phosphate safe for pregnant?

Trisodium phosphate is safe for pregnant women. It is a cleaning chemical that can be used in the home to clean kitchen surfaces, toilets, and bathroom fixtures. Trisodium phosphate has been approved by the Food and Drug Administration (FDA) for use as a food additive and has been deemed safe to use in cooking and baking. The FDA also states that trisodium phosphate may be used safely on contact lenses, dentures, eyeglasses, and jewellery.

Yes. There is no question that this is a vegan product, as the raw materials used are phosphoric acid, sodium carbonate, and sodium hydroxide, which are synthetically produced not of animal origin; however, they are derived from phosphate rocks, not animal sources. Vegetarians can add it to their diet.

Yes, Due to its permissibility under Islamic Law and fulfilment of the Halal conditions, it is generally recognized as halal. Halal certification is also available from some manufacturers.

The product is kosher pareve. Kashruth requirements have been met, and E339(iii) can be certified kosher.

Yes, Celiacs can eat it, as it typically contains no gluten. In addition to containing no wheat, rye, barley, or crossbreeds of these grains, the manufacturing process complies with FDA regulations.

As Trisodium Phosphate is so widely used, with many different purposes, it’s difficult for me to say what the best uses are as every single one will vary, even if it’s a similar use. The most important thing you need to ask yourself is, “what am I using this substance for, and what purpose am I going to put it towards?” Then, decide if the product you want to purchase will be suitable for your needs.

If you have any questions or feedback about Trisodium Phosphate? Comment below and let me know what you think.