What Is Nisin Preparation E234? Uses, Safe, Side Effects

What Is Nisin Preparation E234? Uses, Safe, Side Effects

This article takes up the concern that several individuals may have with regards to Nisin preparation (E234), largely skeptical as a result of making use of an unfamiliar product. It discusses the important details that each user needs to know while using the item, such as what it can offer, how it should be used, and various other relevant details on this subject.

What is nisin preparation?

Nisin preparation is a natural preservative that can be used in food and beverage products to inhibit the growth of Clostridium botulinum. Nisin is an all-natural preservative, which is produced by Lactococcus lactis subspecies cremoris.

Nisin preparation is produced by fermentation of Lactococcus lactis subspecies cremoris. The product contains nisin A and nisin B, two bacteriocins produced during the process of fermentation. The bacteriocins are non-toxic to humans, but have excellent anti-bacterial activity against C. botulinum spores.

What is nisin preparation used for?

Nisin preparation is used as a food additive to prevent spoilage caused by bacteria such as Staphylococcus aureus and Escherichia coli. It may also be used to prevent spread of contamination from raw materials into finished products through injection or spraying systems.

Nisin preparation is used in meat, poultry and dairy products as a preservative to inhibit the growth of bacteria that could cause spoilage or food poisoning.

Nisin preparation may also be used for purposes not listed in this medication guide.

How is nisin preparation made?

The Nisin preparation is made by the fermentation of a strain of lactococcus lactis. The initial step involves growing the bacteria in a broth containing nutrients and carbon sources, such as glucose or lactose. Once the bacteria have reached the desired concentration, they are exposed to an antibiotic such as streptomycin and penicillin, which kill off any other bacterium that could compete with Nisin-producing Lactococcus lactis for nutrients.

Then, a sample of the broth is taken and tested to ensure that it contains sufficient levels of Nisin. If not, additional Lactococcus lactis are added until the desired concentration is achieved.

After this point, several rounds of growth and testing may be necessary to achieve optimal amounts of Nisin within each batch of culture broth.

How does nisin preparation work?

As part of its preservation mechanism, nisin binds to anionic phospholipids in the cell membrane (including lipid II), and then inserts into the membrane.

All biosynthetic processes in Gram-positive bacteria can be stopped by these processes, resulting in their death. Due to its impermeability to Gram-negative bacteria’s cell walls, it is ineffective against them. 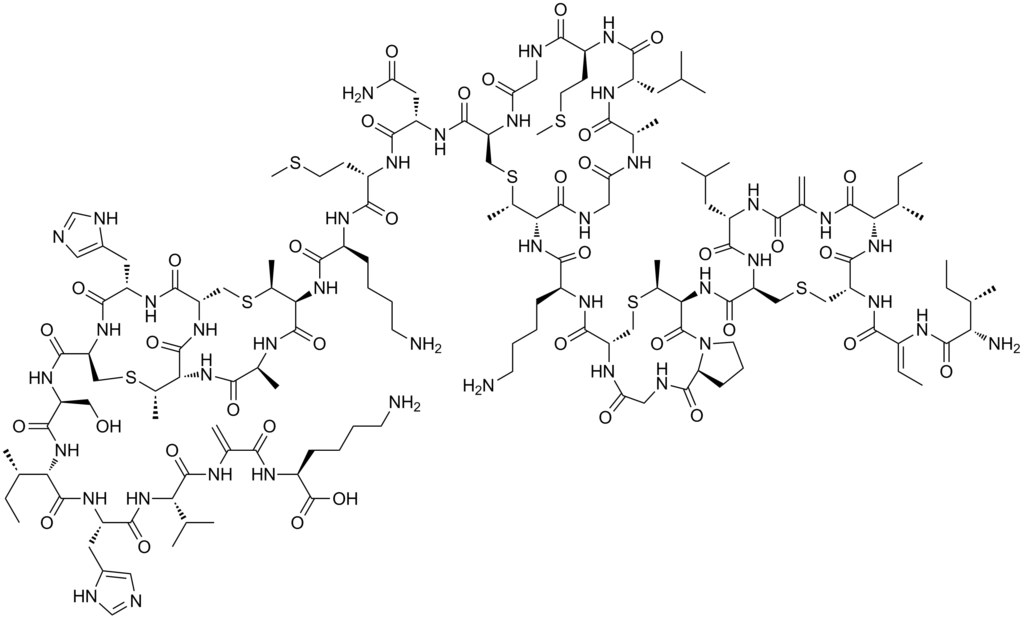 Stability increases with a lower pH. In addition to its acid resistance, Nisin is also resistant to high temperatures. During food preservation and processing, its thermal stability can be used to inhibit various Gram-positive bacteria.

What are the application of nisin preparation?

Nisin can be used in cheese, canned food, and meat products to:

Using Nisin can help reduce the intensity of heat treatment, and therefore reduce the loss of nutrients in canned food. At the same time, it inhibits the growth and reproduction of heat-resistant spore-formers and extends the shelf life of food.

The addition of nisin to pickles, for example, reduces the amount of sodium benzoate and potassium sorbate and inhibits lactic acid bacteria growth and reproduction.

Additionally, nisin inhibits the growth of Clostridium botulinum, which leads to the spoilage of meat product.

Microorganisms easily grow and cause microbial contamination during beer processing. By inhibiting Gram-positive bacteria growth, Nisin can enhance the sterilization effect of hops on thermophilic bacteria without adversely affecting the fermentation characteristics of beer yeast, in turn ensuring beer quality and flavor.

Even under ultra-low temperatures, Listeria can still be found in ice cream during the production process. The use of Nisin can inhibit Listeria growth.

Microorganisms can contaminate milk during the production, storage, and transportation processes.

Working with other Preservatives

This shortcoming is compensated by the combination of Nisin with other preservatives or acidulants (citric acid, lactic acid), which can exert a broad-spectrum antibacterial effect.

There is sometimes a synergistic effect between it and Natamycin. The preservative Natamycin is produced by the fermentation of streptomyces and inhibits the growth of various molds, yeasts,, and mycotoxins.

As a result of its low solubility, it is only used for preserving food surfaces.

Is nisin preparation safe to eat?

Nisin preparation is safe for consumption if it meets all government regulations for food safety. The FDA requires that all food manufacturers use only those antibiotics that have been tested for safety and approved for use in food production by the U.S. Department of Agriculture (USDA).

In pasteurized (processed) cheese spreads (with fruits, vegetables, or meats), nisin preparation is Generally Recognized as Safe (GRAS) at a maximum level of 250 mg/kg in the finished product to inhibit the outgrowth of spores of clostridium botulinum  .

In addition to the following products (not entirely included), it is permitted to be used at maximum levels of 2.5-30 ppm:

According to Commission Regulation (EU) No 231/2012, Nisin (E234) is classified as an authorised food additive.

EFSA concluded that using nisin (E 234) in unripened cheese and heat-treated meat products would not pose a safety concern since nisin A exposure was below the new ADI (1 mg/kg).

There is a maximum usage of 10 mg/kg to 12.5 mg/kg for the following products:

In the category of “Preservatives”

The code number 234 is used in Australia and New Zealand.

What are the side effects of nisin preparation?

Nisin is an antimicrobial peptide that is produced by certain types of bacteria. It is referred to as a bacteriocin because it only kills other bacteria and does not affect humans or animals. Nisin has been used commercially since the 1960s in dairy products, meat products, fruit juices and pharmaceuticals.

Nisin preparation is not known to have any serious side effects. However, there are some mild side effects that you may experience when using this drug. These include:

Nausea and vomiting. This is one of the most common side effects of nisin preparation and is usually mild to moderate in intensity. If nausea or vomiting occurs, take your medication with food to avoid an upset stomach. If these symptoms do not improve or worsen, contact your doctor immediately.

Diarrhea. Diarrhea can occur if you take too much nisin preparation, but it is generally mild in intensity and improves with continued use of the medication.

Allergic reaction. Nisin can cause an allergic reaction in people who are sensitive to it, even in small amounts. Symptoms include redness, itching and swelling of the skin, hives, chest tightness and difficulty breathing. In case of any of these symptoms, seek immediate medical attention.

Increased heart rate (tachycardia). Nisin may cause your heart rate to increase significantly while taking it, especially if you have a history of heart disease or other conditions that affect the heart’s function. Your doctor may monitor your heart rate during treatment with nisin.

Where to buy nisin preparation?

Nisin preparation is available at most health food stores and pharmacies. It can also be ordered online from reputable retailers such as Amazon or eBay.

Nisin preparation is available in two forms: as a powder that can be mixed with water, and as a liquid suspension (marketed as Nisipan-P). The powder form is more convenient for traveling and for use in recipes such as salad dressing.

Nisipan-P comes in an aluminum tube that contains a small amount of bacteria-killing nisin preparation. The cap of this tube must be removed before use. The contents are then squeezed out onto the food to be disinfected, or into a spray bottle filled with water.

Yes. Nisin is a natural product that has been extracted from the bacteria Lactococcus lactis. It’s a peptide that works as an antibacterial agent, and it’s commonly found in dairy products.

Nisin preparation is not considered vegan, it is generally considered safe for vegans to consume. The main concern with consuming nisin-containing products is that they may be made from milk, which some vegans refrain from consuming.

Yes, Nisin preparation is halal because it is made through the fermentation of lactose, a sugar that is extracted from whey. The bacteria used to ferment the lactose are a strain of Streptococcus lactis subsp. lactis biovar diacetylactis.

Is nisin a natural preservative?

Nisin is a natural preservative that is produced by certain strains of lactic acid bacteria. It is not a naturally occurring preservative, as it does not occur in nature. However, it is still considered “natural” due to the fact that it is produced by living organisms and has been used for thousands of years (since at least the early 20th century).

Is nisin preparation bad for you?

In short, no. Nisin is a naturally-occurring protein that’s found in milk and cheese products, and it’s also used as a food preservative. It’s been used in the food industry for decades, and it’s considered safe by the FDA.

It can be prepared using milk or milk powder and other ingredients, but this doesn’t make it dangerous to consume. It’s often used in cheese production, where it helps to prevent mold growth on the surface of the cheese while allowing it to age properly inside the rind. In fact, proper aging is one of the best ways to make sure that your cheese tastes great—and nisin helps with that process!

Yes, nisin preparation is gluten free. Nisin is a protein that naturally occurs in some strains of Lactococcus lactis bacteria. It is used to delay spoilage of dairy products.

Is nisin safe during pregnancy?

Nisin is a lantibiotic, which is a natural antibiotic found in milk. It can be used as a preservative in food products, and it’s also used to treat infections in humans.

There is no evidence that nisin causes harm during pregnancy. However, there is some concern that the use of nisin during pregnancy could cause an allergic reaction in your baby after birth. This is because nisin is a protein, and proteins are foreign substances that could trigger an immune response if they enter your body during pregnancy.

The food preservative nisin preparation (E234) is used in the food and beverage industry as an additive to probiotic foods and beverages. Nisin preparation contains the bacteriocin nisin A, which is not produced by naturally occurring microorganisms.

The activity of nisin preparation is relatively weak in acidic environments, but has increased activity and spectrum when pH approaches neutral levels. This makes it useful for the preservation of bacteria found in fermented food products with low pH values such as sauerkraut or pickled cucumbers.

If you have any questions about nisin preparation E234? Let us know in the below comments.