What is Rebaudioside A (reb A)? Uses, Safe, Side Effects

What is Rebaudioside A (reb A)? Uses, Safe, Side Effects 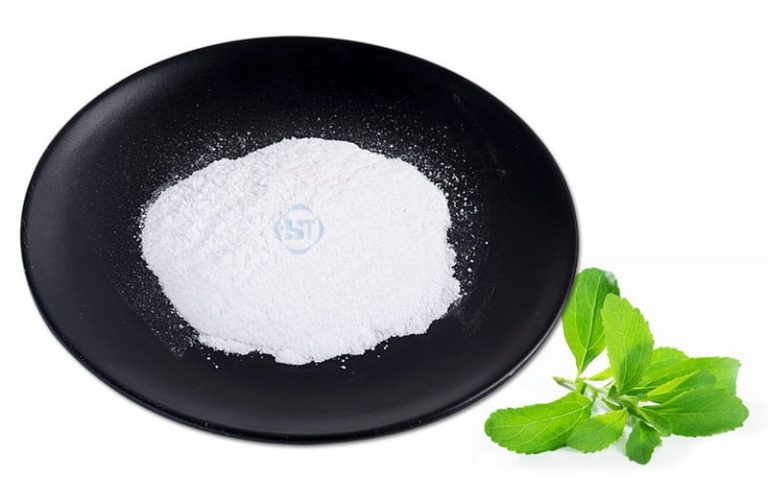 Rebaudioside A (rebA) is an artificial sweetener based on stevia, an herb that has been used for hundreds of years. RebA could be considered a “new” sweetener as it wasn’t widely used until the 1980s when Japan’s Morita Kagaku Kogyo Co. Inc. discovered the sweet compound while researching stevia leaf extract.

With so many varieties of stevia out there, it can be hard to know where to start. Rebaudioside A (reb A) is a stevia extract that is used as a food additive and sweetener. To learn more about reb A, its uses, safety, ways to consume and side effects, read the information below.

What is rebaudioside A？

Rebaudioside A is a natural sweetener that is extracted from Stevia leaf. It is a white to off-white powder with a sweet taste that is 300 times sweeter than sugar, but without the unpleasant aftertaste found in many artificial sweeteners.

The Rebaudioside A extract has been approved for use as a food additive by the Food and Drug Administration (FDA), which means it can be added to any food or beverage, including chewing gum and soft drinks. Rebaudioside A also has GRAS status in the U.S., meaning it can be used in foods as well as dietary supplements without limitation.

What is rebaudioside A used for?

Rebaudioside A is used as a dietary supplement to help people lose weight, reduce blood pressure and improve heart health.

Rebaudioside A is available as tablets or capsules to take by mouth, liquids or powders that dissolve in water, or syrups or suspensions (liquid mixtures) that can be taken by mouth.

Rebaudioside A may be used for:

Weight loss. Rebaudioside A may help reduce appetite and increase feelings of fullness (satiety). Taking rebaudioside A may also help you follow a low-calorie diet better than using other forms of stevia or other artificial sweeteners. However, it’s not clear if this will result in actual weight loss.

What is rebaudioside A made from? 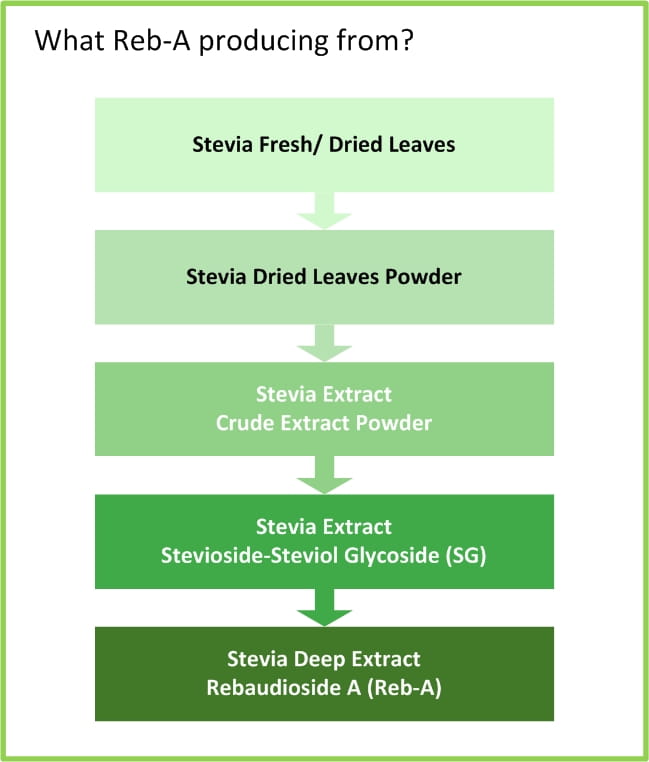 Rebaudioside A is a stevia extract found in the leaves of the Stevia rebaudiana plant. This natural sweetener has been approved by the FDA for use in food and beverages as a low-calorie sweetener, as well as for tabletop use, thanks to its zero calorie content and negligible glycemic index. However, it’s important to note that rebaudioside A can cause reactions in people with allergies to ragweed or chrysanthemums.

Rebaudioside A is part of a group of steviol glycosides called steviolbiosides, which are naturally occurring compounds found in over 200 plant species worldwide. Steviolbiosides are closely related chemically to stevioside (another type of stevia extract), but they have different molecular weights and ratios of sugars present within them.

Rebaudioside A is typically extracted from stevia leaves through a process known as chromatographic isolation, where crude stevia leaf extract is separated into individual compounds based on their molecular weight and solubility characteristics. The resulting product contains mostly rebaudioside A along with other related compounds like rebaudioside D and erythritol.

How to extract rebaudioside A?

In general, the process of extracting stevioside from a mixture of stevia glycosides is similar to that of purifying rebaudioside A.

This is a brief description of the manufacturing process for Reb-A (98%) from a Chinese manufacturer:

After drying, crushing, and extracting the leaves in hot water, stevia rebaudiana bertoni is prepared. Stevia glycosides are present in the extract, along with leaf pigments and pectin.

After precipitating impurities with ferric chloride and calcium oxide, the extract was filtered. To trap steviol glycosides, the filtrate was passed through an adsorption resin.

In the next step, the resin will be washed with ethanol to release steviol glycosides, and the ethanol extract will be desalinated and then decolorized with activated carbon. After that, the product is dried, concentrated, and decolored. The final step is to spray dry rebaudioside A.

Due to the similarities in chemical structure between stevia glycosides – the same backbone steviol – it is difficult to obtain reb A of high purity.

Powder or granular form of hygroscopic white to off-white material.

It is about 300 times sweeter than sucrose, with less bitterness and licorice taste than stevioside.

In Merisant’s 2008 stability testing, Reb A was found not to degrade during storage at 105°C for 96 hours or in carbonated citric acid and phosphoric acid beverages.

According to Cargill’s stability testing in 2008, rebaudioside A is more stable at pH 4 to 6 and temperatures of 5 C to 25 C.

Difference between rebaudioside A VS. stevioside

Rebaudioside A and stevioside are two of the most popular natural sweeteners that have been used for centuries. Both sweeteners are derived from plants and have similar nutritional profiles, but there are some differences between them.

Stevia contains many of the same compounds as Rebaudioside A, including steviol glycosides (steviosides), rebaudiosides (e.g., rebaudioside A), dulcosides (dulcosin A), and neohesperidin dihydrochalcone (NHDHC). 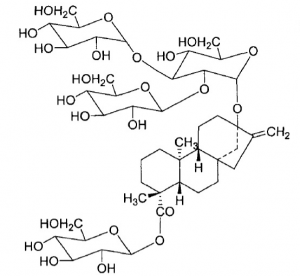 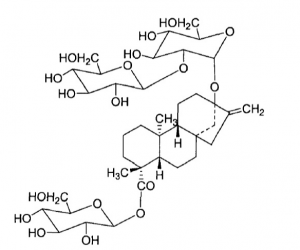 What is the application of rebaudioside A?

Compared to stevioside, Rebaudioside A is a natural sweetener that has a better quality of sweetness – minimal bitter aftertaste – making it widely used in sugar-free foods and drinks. Consumers are increasingly looking for sugar substitutes, which makes natural sweeteners more appealing.

In the end market, Reb A is available as a solid or a liquid. In PureVia packets, you can find 99% Reb A and dextrose, along with natural flavors. Truvia, another brand of reb A solid, is sweetened with erythritol, an alcohol used to bulk up reb A (in the same way dextrose does in PureVia to manage its high sweetness level).

There are a number of foods that may contain reb A, including:

What is the benefits of Rebaudioside A?

Rebaudioside A is a non-nutritive sweetener found in stevia leaves. It has been used as a sweetener in Japan since the 1970s and was approved by the FDA in 2008. Rebaudioside A is 200-300 times sweeter than sugar and has zero calories.

The benefits of Rebaudioside A include:

Zero Calories: Rebaudioside A has no calories so it can be used to sweeten foods without increasing calorie content.

No Glycemic Index (GI): Rebaudioside A does not raise blood glucose levels because it does not contain carbohydrates or starches. No Impact on Blood

No Impact on Blood Sugar: Rebaudioside A does not affect blood glucose levels because it does not contain carbohydrates or starches.

What is reb A in stevia?

Reb A is a naturally occurring substance found in the Stevia plant. It’s 300 times sweeter than sugar and has been used as a sweetener for centuries.

The stevia plant is native to South America, where it’s been used for centuries as a natural sweetener. In recent years, stevia has become popular around the world due to its low calorie content and zero glycemic index (meaning it won’t spike your blood sugar).

Reb A is one of several sweet compounds found in the leaves of the stevia plant. It’s extracted from the leaf using an organic solvent called ethanol. Ethanol is then removed from the extract by distillation, leaving behind a white powder that consists primarily of Reb A molecules.

Is rebaudioside A the same as stevia?

Stevia (stevia rebaudiana) is a plant native to South America that’s been used for centuries as a natural sweetener. While stevia leaf extracts are widely available today as an alternative to sugar, they’re not as highly purified or concentrated as rebaudioside A.

Is rebaudioside A safe?

Rebaudioside A is a natural sweetener that’s been studied for its safety. The Food and Drug Administration (FDA) approved it as a food additive in 2008, and it has been used in many foods and beverages since then.

The FDA also reviewed the studies on rebaudioside A done by the manufacturer, Stevia International Inc., which showed that this sweetener was safe when used at levels up to 1 percent of the total weight of the product. In December 2014, the FDA reaffirmed that rebaudioside A is generally recognized as safe (GRAS) and no longer requires premarket approval to be used as a food additive in the United States.

Is rebaudioside a danger to healthy?

Rebaudioside A is a steviol glycoside that is extracted from the leaves of the South American plant Stevia rebaudiana. It’s used in place of sugar to sweeten food and beverages, and is labeled as E960 on food packages.

Rebaudioside A is not a danger to healthy people, but it may be dangerous for people with diabetes who are trying to control their blood sugar levels. In these people, it can cause an increase in blood glucose levels.

The reason rebaudioside A has this effect on blood glucose levels is because it’s very sweet. The more sweet something is, the more likely it is that your body will absorb more of it and use it as fuel. This means that if you consume something containing rebaudioside A, your blood sugar levels will rise dramatically — possibly higher than they would have been if you had eaten normal sugar instead.

What are rebaudioside A side effects?

Rebaudioside A, a natural sweetener found in the stevia plant, is a zero calorie alternative to sugar. The FDA approved rebaudioside A as a food additive in December 2010.

But while it’s safer than artificial sweeteners like aspartame, it’s not risk-free. Here are some potential side effects you might experience when eating foods with rebaudioside A.

Diarrhea and/or vomiting. These are the most common symptoms that people experience when taking this weight loss product. However, these symptoms should not last for more than a few days. The good news is that they do not require any medical treatment.

Headache. You might experience headaches after taking this supplement, but this is also uncommon and will pass after a few days of use. If it does not go away on its own, then you should see your doctor to get advice on how to manage the condition better.

Nausea or stomach pain may also occur in some people, but again these are usually mild and will go away before too long without any need for medical intervention.

Does rebaudioside A cause cancer?

The Food and Drug Administration (FDA) approved rebaudioside A as a food additive in 2013, but the agency withdrew its approval on June 1, 2014 after receiving comments from consumers concerned about its safety. Rebaudioside A was part of a class of ingredients called high intensity sweeteners that have been linked to cancer risk in laboratory animals. However, several studies have shown that rebaudioside A does not cause cancer in humans or animals at levels that are similar to those found in foods containing this ingredient

Rebaudioside A is one of the most powerful ingredients in the all-natural Stevia extract, which has been used for hundreds of years for medicinal purposes. This plant extract has a wide range of uses, due to its ability to stimulate dopamine receptors in the brain. As long as you are aware of the safety concerns such as skin sensitization and itching on higher doses, you can enjoy all the health benefits that Rebaudioside A offers and have a worry-free day!

What kinds of questions have you found about this ingredient? Let us know in the below comments.