What is Stevioside in Food? Uses, Safe, Benefits, Side Effects

What is Stevioside in Food? Uses, Safe, Benefits, Side Effects Stevioside, also known as E960, is a white powder extracted from the leaves of a plant called Stevia rebaudiana. This plant is native to South America and has been used for centuries for both medicinal and culinary purposes with some cultures making it their main sweetener. Today steviol glycosides are being synthesized in laboratories in order to release their potential as low-carb, zero calorie, flavor enhancers especially for the food and beverage industry.

Stevioside is a Stevia extract that provides sweetness without adding calories. It belongs to the stevia plant family and can be used as a sugar substitute for food, drink and other products like toothpaste, food supplements etc.

Stevioside is a natural sweetener extracted from the leaves of the stevia plant. It has been used for centuries in South America as a sugar substitute.

Stevioside has been used clinically in Japan since 1967 and is now approved for use in over 40 countries worldwide, including Canada, Australia, Brazil, China and Singapore.

What is stevioside used for?

Stevioside is a natural sweetener that’s extracted from the leaves of the stevia plant. It’s often used in combination with other sweeteners like sugar and high-fructose corn syrup.

Some people use stevioside as an alternative to sugar or artificial sweeteners because it has no calories and doesn’t raise blood sugar levels. It also has antioxidant properties, which may provide some health benefits.

Stevia is a plant native to Central America and South America that produces small leaves that have a sweet taste without calories or carbohydrates. Stevia leaves have been used for centuries as a sweetener by indigenous tribes in South America, who sometimes chewed on them or brewed them into tea.

Today, stevia leaf extract is widely available as a tabletop sweetener or supplement form — either in liquid or powdered forms — that you can add to your coffee or tea. Some people also use it in place of sugar because it doesn’t affect blood sugar levels like regular table sugar does.

What is stevioside made from?

Stevia rebaudiana is a member of the Asteraceae family, or sunflower family, which includes many other plants such as calendula, chamomile and lavender. The stevia plant typically produces purple flowers that are pollinated by hummingbirds and bees.

The stevia plant has been used for centuries by indigenous peoples in South America as a sweetener because it has no calories and has antimicrobial properties. It’s also known as kaa he’e in Hawaii and tejocote in Mexico.

How to extract stevioside?

In general, stevioside is produced by precipitating, extracting, decolorizing, and spray-drying stevia leaves. From the manufacturer GLG Life Tech in Canada, here is the manufacturing process.

Afterward, the leaf extract is passed through an adsorption resin, which traps the steviol glycosides.

After washing the resin with ethanol, decolorize the resulting solution with activated carbon to remove the leaves’ colors, and then concentrate by evaporating.

Decolorize, filter, and spray-dry the product again. After spray-drying, the product is combined with similarly processed extracts, dissolved in ethanol and/or methanol, crystallized, and filtered. Finally, stevioside was filtered and spray-dried after further crystallization processes.

Powder that is white to off-white in color and hygroscopic. 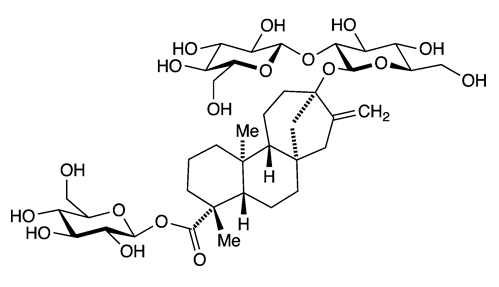 It is 250-300 times sweeter than sucrose, and its sweetness can last for a long time in the mouth, but it has a bitter taste and a bad aftertaste, which limits its use at high concentrations.

Despite heating for two hours at 100 °C over a pH range of 3-9, the sweetness can be maintained. When carbonated phosphoric and citric acidified beverages are carbonated (also with Reb-A), it remains stable at room temperature.

With artificial sweeteners like aspartame and acesulfame-K, it has a sweet synergistic effect.

Rebaudioside A vs. Stevioside

Stevioside is an extract from the leaves of the Stevia plant, which is used as a sweetener in many products.

It has a higher sweetness intensity than sugar, and it does not raise blood sugar levels. It is also heat stable and can be used in cooking and baking.

Rebaudioside A is another extract from the leaves of the Stevia plant, but it is more processed than stevioside.

Rebaudioside A has been approved by the FDA as a food additive but not as a sweetener. It has been shown to be safe for use in foods such as yogurt and fruit juice concentrates where it replaces sugar or corn syrup solids.

The main difference between stevioside and Rebaudioside A is their taste profile. Although both are derived from the same plant species, they have different molecular structures, which means they have slightly different tastes.

Rebaudioside A has a bitter aftertaste because it contains more chlorogenic acid, while stevioside has a sweeter taste with less bitterness. This is why some people prefer one over the other as a sweetener.

Comparisons between the two are as follows:

What is the application of stevioside?

Among other steviol glycosides, stevioside was the first to be isolated and used in food & drink with reduced calories & sugars. These are natural plant-based products that do not raise blood sugar levels (safe for diabetics) and contain zero calories.

Food and drink manufacturers are switching to natural sweeteners, such as stevia sweeteners and monk fruit sweeteners, as part of their efforts to reduce calorie consumption and sugar consumption.

Stevioside is about 250-300 times sweeter than table sugar, so when used as a sugar substitute, only a small amount is needed.

Due to its unpleasant taste, its use is not as widespread as reb A.

There are a number of foods that contain stevioside, including:

In addition to not promoting tooth decay, it doesn’t affect blood sugar levels, making it a good sweetener for kids’ confectionery. As it is heat-stable, it can also be used in cooking and baking.

In pharmaceutical products, stevioside is used as a sugar substitute in lozenges; in personal care products, it is used as a tooth-friendly sweetener in toothpaste.

Is it safe to eat stevioside for the body?

The stevioside extract is safe to eat. The only side effects that have been reported so far are digestive issues and headaches.

Stevia is a plant that belongs to the sunflower family, where it grows in South America. Stevia leaves contain stevioside, which is about 200 times sweeter than sugar but has no calories, making it ideal for diabetics and people who want to lose weight.

When used as a sweetener, stevia can be mixed with other ingredients like honey or maple syrup for greater taste and texture. However, there are some concerns about potential side effects of stevia use for women who are pregnant or nursing babies.

Is stevia and stevioside the same? The plant Stevia Rebaudiana Bertoni (family Asteraceae) is native to Paraguay, Brazil, Bolivia and Argentina. The leaves have been used as a sweetener for centuries in South America, where they are highly valued for the sweetness they provide without any calories or effects on blood sugar levels.

Stevia extract is made from the leaves of this plant, and it has been used as a natural sweetener in Japan since 1970. Since then it has become popular as an alternative to sugar or artificial sweeteners all over the world.

The Food and Drug Administration (FDA) considers pure stevioside safe for use in food. However, when you eat or drink foods with stevia, it may interact with other ingredients in your diet and cause side effects.

You can use stevia to sweeten your beverages, tea, coffee, and baked goods, but it’s important to know how much you’re using so you don’t exceed the acceptable daily intake (ADI). The ADI for adults is 4 milligrams (mg) per kilogram (kg) of body weight (1 mg/kg for children). The FDA says that eating 20 mg or less per day shouldn’t cause any harmful side effects.

What products have stevia?

Stevia has been used for centuries as a sweetener in South America. It’s made from the leaves of the stevia plant, and it’s 200 to 300 times sweeter than sugar, so you only need a tiny amount.

Stevia can be used in many of your favorite foods and drinks. Here are some examples:

Beverages (including coffee and tea)

Where to buy stevioside?

Stevia can be purchased in its natural form, as a liquid, powder or tablet. It also comes as an extract or refined powder, which can be used to sweeten food and drinks.

You can buy stevioside online through Amazon, eBay or Alibaba. In some countries, you may find it at health food stores or specialty stores selling natural products.

You can also order it from many websites that sell herbs and supplements for cooking and baking in bulk amounts such as Frontier Herbs and Swanson Health Products.

So, stevioside is a natural sweetener that has been around for decades. It can be used to sweeten drinks and foods without any calories or other nasty chemicals. It’s widely considered safe by scientists and researchers, both to humans and the environment. It can be found in a number of supplements and green teas, but is also quite widely used in Japan as a way to curb sugar addiction while still satisfying the taste buds.

What kinds of feedback have you found stevioside? Let us know in the below comments