What is Xanthan Gum (E415) in food: Uses and Substitutes

What is Xanthan Gum (E415) in food: Uses and Substitutes

Xanthan gum, a high-molecular-weight extracellular polysaccharide widely used as a thickener, emulsifier and stabilizer in food with the European food additive number E415. It is different from other polysaccharide gums (same with gellan gum) as made from bacterial fermentation while others are extracted from or parts of a plant.

What is Xanthan Gum made of? 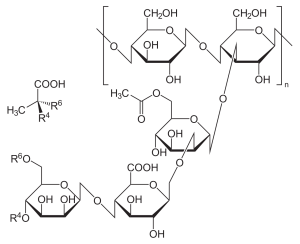 Structure of repeating unit from Wikipedia

The ratio of above three monosaccharides, glucose: mannose: glucuronic acid is 2:2:1. The substitution degree of pyruvic acid and acetic acid depends on the media culture compositions and fermentation conditions.

How is Xanthan Gum made?

Commercial Xanthan gum is produced by fermentation of a carbohydrate source (mainly from corn starch) with strains of Xanthomonas campestris (a naturally occurring bacterium can be found on the leaf surfaces of green vegetables), then puriﬁed with ethanol or isopropanol. The final product is manufactured to a salt (sodium, potassium or calcium).

Cream-coloured powder with a neutral flavor taste, commonly supplied 80mesh and 200 mesh in the market.

A high viscosity can be achieved with a low concentration and the common usage in food for thickening is 0.5% or less. Generally, the viscosity of its 1% solution is between 1200-1700 cps that is around 100 times stronger than that of gelatin.

The solution viscosity is stable and almost not be influenced by the changes of pH (pH 3 – 11), salts (10% KCl, 10% NaCl2, and 5% Na2CO3) and temperature up to 90°C, while other hydrocolloids (pectin, sodium alginate) will break down under such conditions.

Synergistic interaction with other plant galactomannans in increasing viscosity, such as with guar gum (higher viscosity), locust bean gum (can form a gel), carrageenan and konjac glucomannan. It also has a synergistic effect with starches (prevent starch gelatinization) or modified food starch.

Viscosity is high in low shear rate and become low at a high shear rate, but returns to its original viscosity once the shear forces are removed. The pseudoplastic property plays an important role in stabilizing, thickening, suspension and emulsion.

Xanthan gum is primarily used as a thickener to increase the viscosity of a liquid without changing other properties of food,  such as in fruit drinks, fruit juice concentrates, sauce, and salad dressing.

It also acts as an emulsifier to help prevent oil and water separation, improve protein stability, prevent fat floating, and prevent protein precipitation by stabilizing the O/W emulsion due to its lipophilic and hydrophilic groups. Such applications are in protein and milk beverages.

Not a gelling agent

It is not used as a gelling agent due to its weak gel strength or almost non-gel strength, but it can form a ﬁrm rubbery gel with locust bean gum, with a concentration of 0.5%, respectively.

What’re the Uses of Xanthan Gum?

With the properties of resistance to acid, alkali, salt, heat and enzymes; plus the multi-function of suspension, emulsification, stability, and thickening, xanthan gum is the most used gum in the food market and also widely used to thicken drilling mud, textiles and cosmetics.

Thickening with xanthan gum is commonly found in the following food products:

And therefore it delays starch aging and extends the shelf life of baked goods and refrigerated dough.

It can also be used as a substitute for eggs to reduce the usage of egg white but without affecting the soft taste and appearance. Adding it to the bread spread can prevent the spread of dehydration caused by the water absorption from bread.

Xanthan gum can also be used in gluten free baking to replace the function of gluten to bind flour together which does good to people who have celiac disease.

During the heat-stable salad dressings production, it adds smooth and distributes other ingredients evenly to the salad.

Generally a stabilizer for ice cream and functions as follows:

With excellent salt, acid and alkali resistance, and the ability to thicken both hot and cold sauces, xanthan gum can be used as a thickener to replace starch and overcome the shortcomings of starch precipitation, make sauces fine and uniform, improve the coloring, and extend the shelf life.

Xanthan gum can also be used as a water-binding agent and texture modifier in sausage and brine-injected ham to increase water holding capacity, impart a smooth and elastic tenderization.

What are Xanthan Gum Substitutes?

Among the above replacements, only psyllium husk, guar gum and locust bean gum are defined as dietary fiber which has the benefits of ():

The difference between xanthan gum and the substitutes are mainly in five aspects:

Native corn starch is separated from corn and used widely as a thickening agent in fresh food or food for short-time storage due to the limited application caused by, e.g. the insolubility in water, unresistant to acid, heat or shear. Therefore, native corn starch is sometimes made to modified corn starch for specialized uses.

Following are some advantages of xanthan gum than corn starch:

Psyllium husk, the seed coat from the psyllium seed, which can be used as a source of fiber and also can replace xanthan gum as a thickener or binding agent in gluten-free baking.

A cellulose derivative or the sodium salt of CMC, to improve the solubility of CMC in water, made from the natural cellulose after alkalinization and etherification. It is another popular thickener (not a gelling agent) in food with the properties of thickening, suspension, emulsification and stabilization. Learn more about Sodium CMC

A polysaccharide extracted from the red algae of the class Rhodophyceae, insoluble in cold water, commonly used as a gelling agent in jelly and can replace gelatin. Learn more about Agar Agar

It is the endosperm of the seed of the carob (locust) tree, this polysaccharide is commonly used as a thickener (can also be acted as a gelling agent but with a high concentration) in ice cream. Learn more about LBG

Water-soluble polysaccharides with the strongest viscosity, made from the root of the konjac plant, used as a thickening and gelling agent commonly in meat products, pastas and noodles. Learn more about Konjac

Commonly made by cooking collagen from the skin and bones of fish, beef and pig and mainly used to produce a gel in yogurt, pudding and ice cream. Not suitable for vegetarians as originated from animals. Learn more about Gelatin

Extracted from red algae, with both thickening and gelling properties. This ingredient can be divided into three types: Kappa, Iota, and Lambda according to the source of red algaes and classified into two grades (semi-refined and refined) based on the different manufacturing processes. It is mostly used in meat. Learn more about Carrageenan

Is Xanthan Gum Safe to Eat?

Yes, it almost has no side effects and the safety has been approved by the U.S. Food and Drug Administration (FDA) and European Food Safety Authority (EFSA), as well as the Joint FAO/WHO Expert Committee on Food Additives (JECFA).

Xanthan gum (E415) is listed in Commission Regulation (EU) No 231/2012 as an authorised food additive and categorized in “ additives other than colours and sweeteners” ().

After the studies of carcinogenicity, genotoxicity and other researches, EFSA concluded there is no safety concern and no need for a numerical ADI for xanthan gum (E415) when used as a food additive. However, there is a maximum use level for infants. ()

Its application is listed in “Group I” with the maximum level “quantum satis”. The following are some of its separate uses ():

It is an approved ingredient in Australia and New Zealand with the code number 415. ()

Why is xanthan gum easy to agglomerate?

Xanthan gum is a hydrocolloid, which has a good solubility in water without the need to heat and with a faster hydration rate.

However, if the liquid is not sufficiently stirred during the dispersion process, the out layer of the particles of xanthan gum absorbs water and swells fast, while leaves the inner parts still dry and prevent water enter into, and thus agglomerates are formed.

Which delays the dispersibility and dissolution rate of xanthan gum and prolongs the dissolution time, resulting in that the viscosity cannot be completely achieved in a short time.

How to dissolve or use xanthan gum?

If not dispersed properly, it is easy to agglomerate. To avoid lumps, here are some suggestions:

Does xanthan gum have carbs?

It is soluble fiber which is a non-digestible carbohydrate, but it cannot be listed as a dietary fiber in the label per the FDA guidelines. ()

Yes, it is keto friendly as with low carbs.

There is no clear distinction between natural and unnatural ingredients. Xanthan gum is a microbial-derived ingredient manufactured by fermentation.

It is not nature if natural means the apple in the tree. While it is if the alcohol fermented from bacteria is called natural.

Can xanthan gum be used in halal, kosher and vegetarian foods?

Yes, it is halal, kosher and vegetarian if processed using isopropyl alcohol. Otherwise, it is a questioned ingredient for kosher and halal as ethanol is a concern.

No matter ethanol or isopropyl alcohol is used, xanthan gum is vegan as the raw materials and the manufacturing process without the products come from animals.

Is it Non GMO?

Yes, most of xanthan gum in the market is without GMO as produced from Non-GMO corn (corn is the main source).

Yes, it is gluten free and widely used in gluten free food as it does not contain wheat, rye, barley, or crossbreeds of these grains. Also, it can replace gluten to improve texture in baked goods.

Different with dietary fiber, xanthan gum does not

Now you may have a knowledge of the thickener – Xanthan gum (E415), from the following aspects: